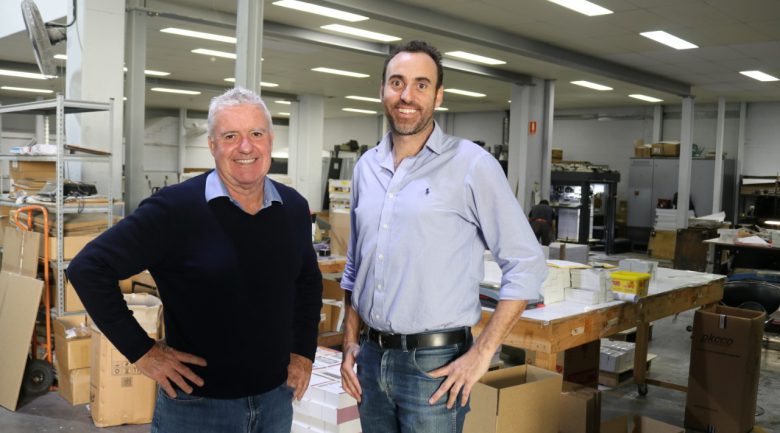 A Star Business feature on NSW’s Clarke Murphy Print as published in the August 2020 edition of ProPrint magazine.

The steady hand of a father, the enthusiasm of a son and a team of long-term employees is the magic combination that keeps Sydney’s Clarke Murphy Print ahead of the game.

The other contributors to the success of this fifth-generation Australian family-owned business are outsourcing very little and having rock solid relationships with strong and committed supplier partners.

Ken Murphy started what is now Clarke Murphy Print 31 years ago as Murphy Print in the garage of the family home in St Ives – a not unfamiliar story in this industry.

But this particular story began way back in the early 1900s when Ken’s grandfather, William (Bill) Murphy, opened Bookman Press in Surry Hills with Ken’s father, Ken Murphy (senior), later coming on board.

Next came Watkins and Murphy which Ken’s father started with Ken himself joining as a young apprentice.

“Print was just what we talked about at the kitchen table all the time,” Ken told ProPrint.

When Watkins and Murphy was sold, Ken went out on his own and Murphy Print was born and was largely fed with a substantial Video Ezy contract.

As with any business there were ups and downs.

The Video Ezy contract went to another printer but on the upside a successful partnership was formed with Bob Clarke, thus creating the name that still exists despite Bob’s retirement.

Fast forward to 2004 when a then 23-year-old Benn would “borrow all I could from Mr Westpac” to buy a 20 per cent share in the business from his parents.

“I wanted Mum and Dad to know I was serious and in it for the long haul,” Benn said.

When Benn joined the business, it was starkly different to what it is today.

Back then it was a prepress and offset-only operation with eight staff. It now covers every print vertical, including a dabble in packaging, and has nearly 60 dedicated staff.

It has a full finishing operation offering PUR, die cutting and cello glazing within its six adjoined factories at Chatswood.

The push into new terrain wasn’t always an easy swallow for the self-declared highly conservative Ken.

“I am very conservative by nature in terms of what we do,” Ken said.

“I’m also a believer in the saying ‘you are not going to get there in five minutes, you’ve just got to chip away’. So, we’ve chipped away, and I have enjoyed the growth and I am enjoying the different areas – I am proud of it.

“But I would probably be playing more golf though, which wouldn’t be such a bad thing.”

He is all about using offset and digital to capture a whole campaign and believes this is only achievable through agile service delivery and keeping up with technology.

“We have been investing really hard in automation. It used to take my grandfather 16 weeks to do a job and now it takes us 16 hours,” Benn said.

“Everything we do complements the other and it smooths out our income stream by having lots of different divisions.”

At the heart of this is delivering a ‘just in time’ product which often uses offset and digital print for personalisation.

“Everything we produce is static, it’s just in time. But we are now finding that our runs are sometimes going up because they are getting personalised and because we are producing it so much faster it can stay current for longer.

“If someone is going to spend $100,000, we want the offset business, the digital, the design, the distribution, the data, everything.”

A ‘Can Do’ attitude is enshrined in Clarke Murphy Print, along with a philosophy of never saying no.

Thousands of jobs pass through Clarke Murphy Print on any given day without a hitch despite a lean headcount and no modern production workflow management system.

As Benn says, the system “just works”, and everyone pitches in to get the job done.

This agility proved its worth during COVID-19 when the company was faced with challenges, like everyone in the industry.

First came the Build-A-Desk initiative, which uses the Australian-made and fully recyclable Envirocore board to create sturdy desks.

The idea was driven in part by a need for the business but also so Benn, a father of four daughters, could reclaim the family dinner table.

The next was the popular Fan In The Stand NRL initiative which allowed footy fans to send in their own photo and have it printed on a hardy corflute which was then cut to shape and installed at the relevant stadium along the eastern seaboard.

The bulk of the work for the Fan In The Stand project was taken up with the IT system which had to be built so fans could order their corflute directly through NRL.com.au.

“The NRL gave us the go-ahead two days before and the boys literally built the website in 48 hours,” Benn said.

“We did the stadiums in North Queensland, Brisbane, BankWest in Parramatta, Campbelltown and Melbourne and Mum and I drove to Brisbane to get them installed right.

“The printing is the really easy part in it. It is the by-product of all the other smarts that go in and around it.”

The ties that bind

Clarke Murphy Print is a truly family owned business and this culture is deeply entrenched.

For 31 years tea and toast with peanut butter or Vegemite has been served at 10am for staff, suppliers and whoever happens to be knocking around at that time. There is also an annual trip away for all staff. So far destinations have included Fiji, Sanctuary Cove on the Gold Coast, Scone to go to the races and many more.

“We still have a tea lady and that’s just one of the traditions that mum and dad started in the garage and it has gone the whole way through,” Benn said.

“When we put a job ad in the paper, we generally get a lot of people apply.”

The traditions go way beyond tea and toast.

Heidelberg is among Clarke Murphy Print’s most enduring suppliers and Benn is emphatic about offset’s strength and power when combined with digital printing.

“My grandfather bought Heidelberg’s, so it is  always going to be Heidelberg’s for us. Offset is so not dead,” Benn says.

Clarke Murphy Print is supported by strong relationships with a wide variety of suppliers covering all facets of print.

Very little work is outsourced, with the exception of foiling and embossing which goes to Goldcraft – the same company used by Benn’s grandfather.

The business diversified into wide format printing in 2010 after Benn managed to convince his slightly sceptical father that it made good business sense.

“In 2010, Dad went to Broome and I ambushed him with a plan to dive into wide format, so we did,” Benn said.

Ken is proud of both the business and the strong, positive relationships it has with suppliers.

“We’ve got a great business and we are immensely proud of it. I think we are a good client to our suppliers,” Ken said.

“It is a really secure business so if this business goes, the country’s gone as far as I am concerned.”

Another area of diversification is fulfilment for overseas companies.

“It all goes out wrapped nicely and it is really high-end. It is personalised the whole way through. No one touches it and it is all automated,” Benn said.

Diversifying in ways like this and growing through acquisition is how Clarke Murphy Print is forecast to grow into the future.

“Pre-COVID we were still growing, and we will be here once normality comes back,” Benn said.

Clarke Murphy Print senior account manager Stephanie James says keeping the majority of production in-house and having a tight team is why the company is able to turnaround seemingly impossible jobs.

“We can do anything from wobblers to posters to floor decals. The beauty of our business is we can do it and send it off from one location so there is always consistency of colour,” Stephanie said.

“When it is all being done here under one roof that makes it much faster. Speed is a massive thing for us in our offering.”

He says the in-house model ensures customers receive high levels of satisfaction from concept to the delivery of jobs.

“We rely on the in-house model to be able to deal with any job that we have got. We don’t rely on people outside of these walls.

“This means that when the more technical jobs come through, the internal knowledge of the business can get the job from concept to delivery with a high level of satisfaction from our customers,” James said.

“I think that is what keeps people returning because they can rely on what we are doing.”

As for the future of print, Benn is excited, in fact you could say he is totally pumped.

“People say it is not like the ‘good old days’ but these ARE my good old days. I’ve never seen it any better if you park COVID to the side,” Benn said.

“When I first started in this business there were seven or eight printers within a kilometre of here but that has changed now.

“The main factor with this is people have not invested.

“We are bringing young people in here. We’ve got Arthur King who is 70 and then we’ve got a young apprentice here who is 16.

One thought on “Clarke Murphy Print: Print is in the blood”