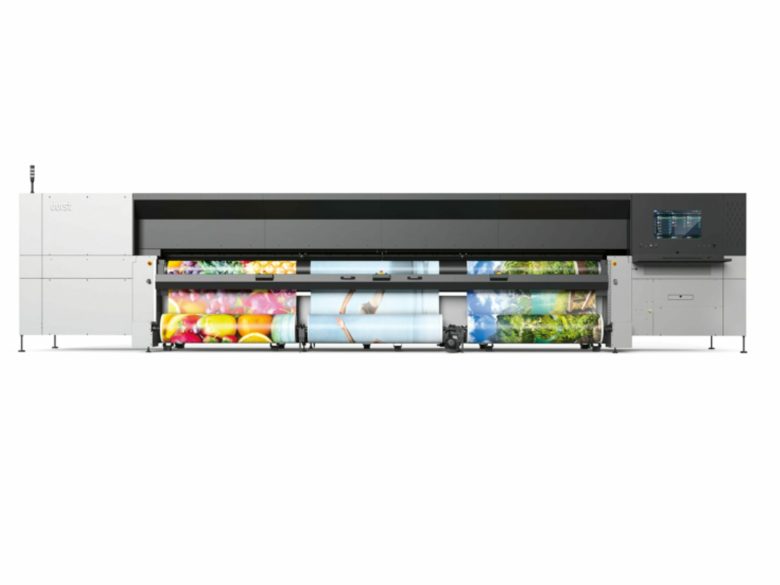 Durst Group CEO Christoph Gamper launched the press on day one of the show and it marks an evolution of the previous Durst Rho 512 and utilises Ricoh Generation 5 printheads. It also brings a five metre option into the P5 platform, offering commonalities which add to greater operability and ease of servicing.

Gamper described the press as reliable and robust adding it includes an inbuilt mesh kit which saves operator time and increases productivity.

It also features an integrated horizontal cutting system which means the press, which includes options for single or multi-roll setup, does not need to stop while cutting.

The other key feature is the option for double sided registration.

“With the Durst P5 500, Durst once again demonstrates its full focus on the reliability of its own printing systems for unattended production processes. With the integration of Durst Workflow Software and the introduction of new functionalities, we are also achieving a significant increase in efficiency,” said Andrea Riccardi, Head of Product Management, Durst.

The new Double 4 technology also represents a new direction with a second CMYK print head row is optionally installed in the P5 UV printing systems, enabling double the productivity to be achieved. The option is availableon the P5 350/HS and P5 210/HS.

Durst also showed the new P5 TEX iSUB dye-sublimation printer which includes an inline fixation system which eliminates one step in the process of printing, and removes the requirement for calendaring.

It comes with a heavy duty single and dual roll functionality with roll diameters of up to 600mm.

Also on the stand was the P5 350 HS with automated feeder and stacker in operation.

For labels, Durst had the Tau 330 RSC which prints 80 pages per minute on UV inkjet.