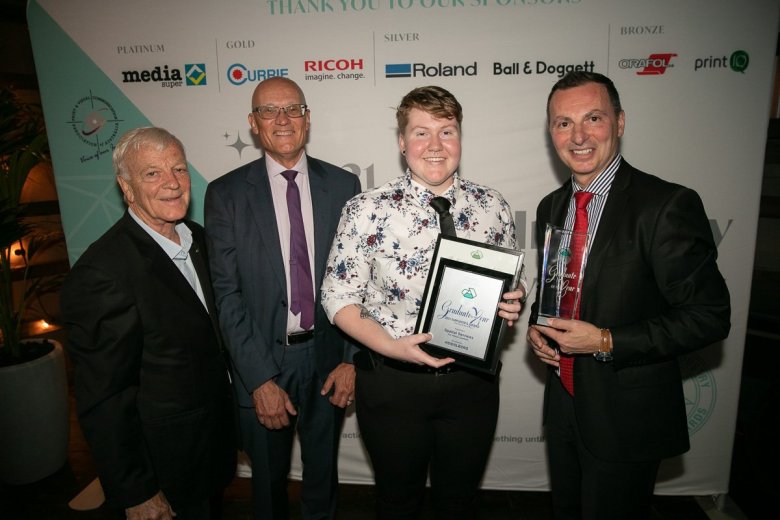 Abbie Graham, a graduate printer from Spatial Services in NSW, was recently able to travel from Bathurst to Sydney on to accept her Heidelberg LIA NSW Graduate of the Year prize at the NSW Printing Industry Creativity Awards night.

Graham, a 20-year-old who excelled in her TAFE program and shows much promise in connecting the fields of graphic design and print, will now go on to compete for the national Heidelberg LIA Graduate of the Year title which will be announced at PacPrint in Melbourne next year.

The award was presented to her by Angus Scott of the NSW LIA, Heidelberg ANZ managing director Savas Mystakidis and Tony Griffin, CEO of Media Super.

Graham joined Spatial Services during her final year of high school after doing work experience there in 2016 and last year completed her Certificate III in Printing and Graphic Arts (Graphic PrePress) at Ultimo TAFE in Sydney where she topped her class.

It was a close call for LIA judges this year with Matthew Zunic of Sydney’s Imagination Graphics and Hisham Hamdan of Ligare the runners up. Zunic recently received his certificate of achievement at a special presentation at his place of work, Imagination Graphics, in Sydney.

The NSW PICA evening was a huge success after months of lockdown and gave printers, suppliers and industry representatives a chance to get together and mingle. It was held in concert with other state PICAs and the National Print Awards which were held with great success in Brisbane on the same night.

Abbie travelled to Sydney with her cousin Jade Graham and was very pleased to be able to accept her award and make a speech to the crowd.

She is looking forward to heading to Melbourne for the national graduate ceremony.