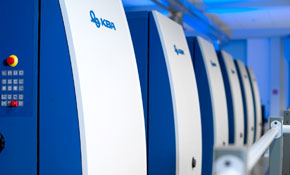 KBA has maintained that it will occupy the same location and 3,500sqm stand size it had at Drupa 2008. Other plans for the show include a new version of the Rapida 105 B1 sheetfed press, billed as having a “Rapida 106 inside” and capable of at least 18,000sph.

KBA Australasia director Dave Lewis told ProPrint that further details regarding the digital press would be released closer to the unveiling.

“It is all top secret at the moment, but it is going to make quite a splash, by all accounts,” he said.