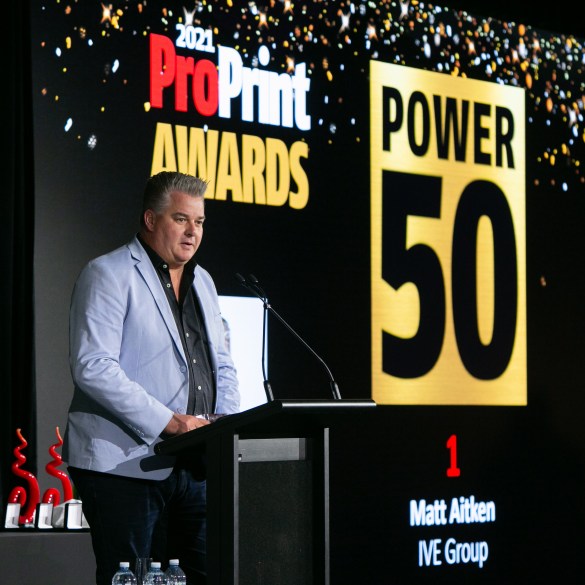 IVE Group CEO Matt Aitken has won this year’s Power 50 at the ProPrint Awards marking his first outright win of the award which recognises senior print industry leaders in Australia.

Owner of family-owned Eckersley Print Group and a respected member of the Print & Visual Communication Association board, Tom Eckersley, placed sixth but was unable to attend the event due to border closures in Queensland but did submit a video by way of an acceptance speech.

Brother and sister team, Debbie Burgess and John Bright, owners of Bright Print Group placed ninth with Dayne Nankervis the CEO of CMYKhub placing 10th. Dayne was also able to submit a video which was played on the night.

The win rounds out a tough year for Aitken which has included navigating the ASX-listed IVE Group through the pandemic with the business coming through strongly and making some useful strategic acquisitions along the way.

These included the purchase of Australian Community Media’s Western Australian arm and more recently Active Display Group and AFI Branding. IVE has another $30-40m in the kitty for further expansion in third party logistics and fibre-based packaging.

Aitken accepted the award at the ProPrint Awards at the Shangri-la Hotel in Sydney last night with over 180 members of the print industry coming together to celebrate the year that was and honour their hard work through what has been a difficult period with the pandemic.

Matt Ashman, managing director of Durst Oceania, was the Platinum Sponsor of the evening and presented Aitken with his winning trophy.

The evening, which included a three-course meal and outstanding entertainment from emcee Sam McCool, was a resounding success as it fast becomes the ‘go-to’ event of the year for the industry.

Durst CEO Christoph Gamper sent his congratulations to all the ProPrint Awards winners from Brixen, Italy – which you can watch below.

Auditing firm, PKF Australia, partnered with the Power 50 to ensure the peer-voted results were true and accurate.

Supplier 50, Emerging 50 and Industry Achievement Awards were also given out on the night.

This year the Top 20 were ranked in the voting, with the remainder of nominees listed alphabetically. Massive congratulations to all winners. Well done on making it through what has been an incredibly difficult period.

Rounding out the Power 50 in alphabetical order:

From all the team at ProPrint, Sprinter and the Printer Media Group, we send all the nominees a huge Congratulations on your achievements this year. Also special thank you to our sponsors and partners as without you this recognition for the industry would not be possible.

The sponsors which made the ProPrint Awards possible – thank you: