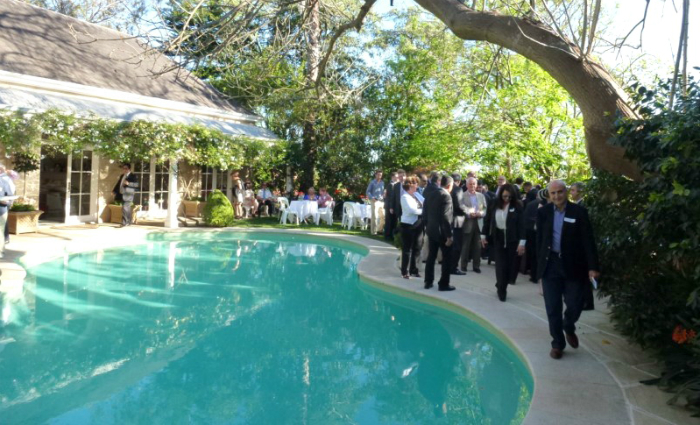 Industry identity Bob McMillan has got top dollar for his historic Sydney home, selling it to a developer for $42m as construction plans along the new North West railway line heat up.

The house sits on 4,999sqm of land in West Pennant Hills, and crucially is within 800m of the new Cherrybrook Station on the under-construction North West Rail Line, making it prime land for high-rise development.

Developer giant Toplace is said to have bought all but a few properties in the suburb between Highs and Glenhope Roads to capitalise on an influx of new residents.

McMillan on the other hand says he is moving because of the development, saying the area has changed in the past two decades he did not want to stay there anymore.

“When we moved in the place was a peaceful countryside, but now they will build a railway right next to it and then units will go up and it won’t be the same,” he says.

McMillan, who has lived in the house for 40 years, says he got a good offer from the developers and the decision to move was an easy one.

The price tag has stunned the Sydney retail scene as the property is nowhere near the ocean with no water in site. The land by itself was last valued at $206,000 in 1996.

However, the ivy-covered house will not be bulldozed to make way for flats as it is protected by Hills Shire council heritage protections.

The sprawling 20,000sqm estate on Castle Hill Road, including extensive gardens and a maid and gardener’s residence, has a storied history.

It was originally built by Captain Francis de Groot, who in 1932 famously gatecrashed the Sydney Harbour Bridge ribbon-cutting ceremony, cutting it himself with a sword while on horseback to the government’s great embarrassment.

The house, named Dunrath, was originally built in Bellevue Hills and moved brick by brick to save it from demolition.

It has since been owned by radio personality Frank Clune and Archibald-winning Australian artist William Dobell before McMillan bought it.

What McMillan will do with the substantial windfall is sure to be hotly debated, but his immediate plans are to move into a new place in Darling Point, Australia’s most expensive suburb, that he describes as ‘not too shabby’.

He last week confirmed he has lent money to printer Sydney Allen, which is also moving into his former McMillan Printing building in Granville.