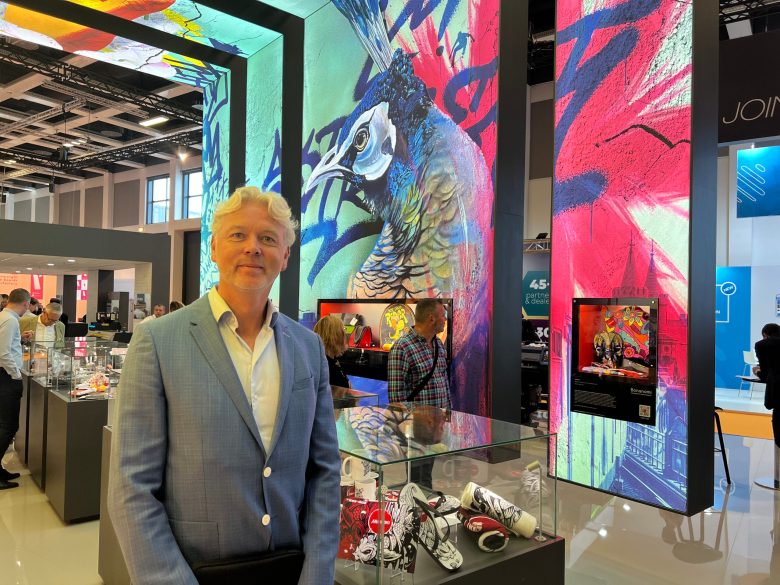 Mimaki is showing off two new machines at FESPA – the JV330 Series, the new TS330 Series dye-sublimation printer and a range of new automation features for the JFX UV range that enable take up of robotic technologies.

The JV330 Series marks the next iteration of the JV Series range. The new feature is the integrated XY cutter which saves time in production. There is also the addition of three rolls now, up from two, meaning the machine can run for longer before a roll change is needed.

The TS330 Series dye-sublimation printer has also been redefined to print 38 per cent faster than its predecessor – the TS300 Series. It features quality core technology which includes a nozzle check unit and sleep cleaning.

The other key announcement was the automation add-ons for the JFX UV print range which make it possible to harness robotics.

“On all of our UV products we have now integrated automation. We opened the machine so that we can communicate with other machines, whether that be a cutter, like a Zund, or other machines. So, every new UV printer for the UJF-3042MKII e, UJF-6042MKII e or the big JFX-600 we opened the communication to integrate with robotics,” Solman said.

“And we already see that our partners are really investing a lot to get robotics into their production environments.

“It is very difficult to get people these last few years and if you only doing the same jobs 24 hours a day this is a very good example of how this can work.”

The Mimaki booth featured a number of examples of work printed on a variety of print technologies offered by Mimaki, including highly textured prints as well as a range of products offered in the 3D range.