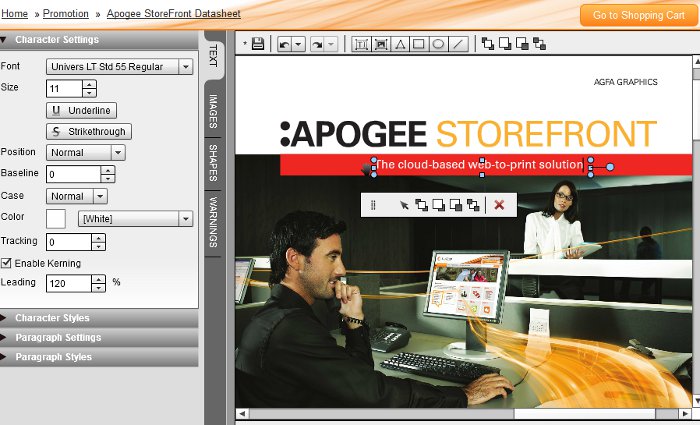 The web-to-print module, called Apogee StoreFront, aims to be user-friendly for both printers and customers, and can be customised and rolled out to several small to medium size clients. It is integrated with Apogee Prepress 8 but can also be used as a standalone RIP and includes a pricing infrastructure and online payment facility.

Apogee Suite 8.0, which will be available in the third quarter of 2012, incorporates Agfa’s own StoreCenter rather than Chili Backoffice; it also omits Chili Publishing’s HTML or tablet publishing feature, as Agfa has its own Eversify tablet publishing system.

The new workflow includes a job merge feature for the combined production of smaller jobs, easier-to-use colour management and a range of new Acrobat plug-ins.

The updated colour management tools include a Smart Input Space Recognition feature which can identify and fix issues related to incorrectly tagged images. Once the output device has been identified, the Press-repurposing module converts the entire CMYK colour space for the chosen device.

Agfa Software product manager Chris Burn said: “The biggest changes to the workflow are probably within our imposition package, Apogee Impose, which now includes more support for web printing and features such as advanced ganging.

“Then there is Apogee StoreFront, which is a brand new product in our range. People should not make assumptions about the product based on its name, as it takes a slightly different approach to many other products out there. It’s incredibly easy to set up and use, which significantly reduces deployment costs. The team has done a great job in delivering new features at all levels and there is something for everyone.”

Agfa is to demonstrate Apogee Suite 8.0 at Drupa.


This article originally appeared at printweek.com