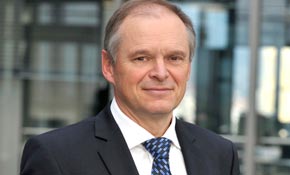 Weickenmeier had been appointed to the role at Drupa 2008, but “is no longer available for the tasks of the Drupa president as a result of the strategic reorientation of the paper segment of Körber and, therefore, resigned his office”, according to the show’s organisers.

Schreier becomes the third Heidelberg boss to take the mantle, following Hubert Sternberg, who was show president from 1951 to 1974 and Thomas Mauser, who was appointed after Drupa 1995 but resigned in 1996.

“I am delighted to accept the role of Drupa president at this particularly exciting and important time for our industry,” said Schreier, who has headed up Heidelberg since 1999.

“Drupa 2012 is a really crucial initiator for the print media industry, and I will contribute significantly to the successful planning and organisation of it,” he added.

Heidelberg is expected to leave its traditionally significant stamp on the exhibition, which is held in Dusseldorf, Germany on 3-16 May 2012, though the manufacturer would be drawn on details of its show plans.

Drupa organisers would not give ProPrint details of the offset manufacturer’s exhibition presence, other than to say: “Heidelberger Druckmaschinen is one of the top 10 at Drupa 2012.”