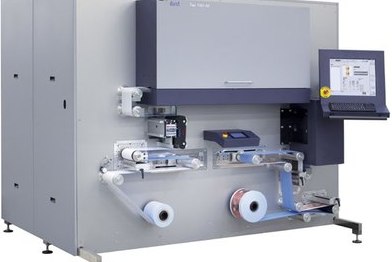 Based upon the company’s 165mm-wide Tau 150 8C machine, launched in 2010, the new platform is available in two configurations.
Durst’s Tau 200 offers a print width of 200mm while the top-end Tau 330 offers print production onto a maximum 330mm web.

Capable of print speeds of up to 48 linear metres per minute, maximum hourly output can reach 950sqm an hour.
The machines incorporate the manufacturer’s proprietary single pass print technology that features Xaar 1001 printheads offering output at a resolution up to 720x360dpi.

Both models are available in a standard CMYK configuration that can be upgraded with white ink and as of late 2012, orange and violet process colours.
Durst, which will exhibit the machines at next month’s Drupa, will also showcase its variable data print option for the Tau 330 machine.

This enables users to print on pre-die-cut or pre-printed labels, which the manufacturer claims will offer “full label-to-label variability”.

Durst chief executive Dr. Richard Piock said the Tau 330 offers a raft of benefits over the company’s existing 150 offering.
“The new Tau 330, with its greatly expanded print width, offers very high size flexibility and at the same time an industry-leading production capacity; two additional and important features which will be source of competitive advantage for our future customers.”