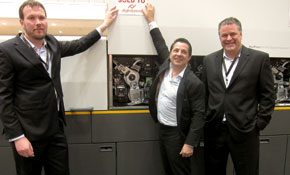 The PrintEx11 purchase was the second Nexpress for the five-year-old, 12-staff outfit in Surry Hills.

Offset print veteran Theo Pettaras told the Daily that his company conducted extensive research before deciding to stick with NexPress and upgrade to the SX3300 – and for very strong reasons.

The Digitalpress managing director said a key attraction of the new press was its ability to run a 660mm sheet size, and print in HD mode down to six microns.

It can also print in tactile 3D, with Digitalpress operations manager Harley Economou estimating the business runs some two 3D jobs each week.

Dimensional print is another talent of the new NexPress. Pettaras said he was planning to use it to print raised designs and lettering, commonly found on high-end work, and not expected from a digital press.

The print house will use the machine’s matte fuser to coat jobs that require a matte finish, again something not usually found inline or on digital printing kit.

Pettaras said he was especially impressed with an abiding NexPress characteristic – the ability to print an extra Pantone colour – among a wide array of fifth-unit solutions. This opens new high-end digital print markets to the company.

The SX3300 will join a Konica Minolta Bizhub 8000, two Roland DG printers and an Océ Colorwave on the company’s production floor.

For David Procter, general manager of Production Printing at Konica Minolta Business Solutions the latest sale was another sign that the reseller deal it inked with Kodak at PacPrint 09.

“Digitalpress will take the NexPress to its full potential,” Procter told ProPrint.