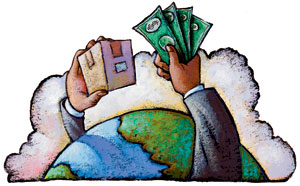 Packaging giant Visy will purchase server and storage infrastructure capacity on-demand from Telstra for the next five years.

The company inked a $50 million deal today covering mobile voice and data services to 140 Visy packaging, paper and recycling sites across Australia, NZ, Asia and the US.

It will support a number of “critical” enterprise systems including Visy’s SAP environment.

Visy CIO Ken Major said he expected the deal to represent a 30 per cent cost saving against its previous approach, where the telecommunications network was separate from the computing model, which was internally supported.

“We now pay a monthly fee based on what we use for not only our telecommunications needs, but also our computing and storage needs so we no longer have the concern of investing in server and storage infrastructure for the future, as this is now available from Telstra as a service on demand,” Major said.

“The capital that was earmarked for IT upgrades will now be better deployed into revenue generating assets across the business.”

Major said he was looking for more collaborative arrangements with Visy’s suppliers.

“Our business model is based on reducing cost, removing risk and managing growth,” he said.

“In order to remain competitive and achieve our commercial objectives in a tough economic environment, we need to change the way in which our IT resources are utilised and look at more innovative offerings around a user-pay model with our vendors, so we can share the risk and reward and allow us to grow together.”